A Quebec classic with tomatoes 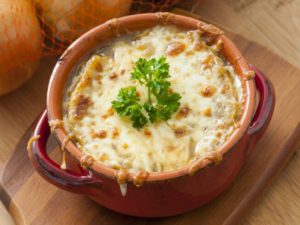 In restaurants, French Onion Soup is a delicacy. It is actually quick, easy and inexpensive to make. This version adds diced tomatoes to the traditional ingredients.

Here is a variant on the Quebec signature soup that we saw on a newspaper web site, and altered to add the special things that make Quebec French Onion Soup the unique dish it is. It adds a can of diced tomatoes to the traditional recipe. Think of Tomato French Onion Soup as something like the ‘Manhattan’ version of traditional onion soup.

French Onion Soup should be paired with a dry red wine, such as Cabarnet Sauvignon or similar. Serve with a hearty salad, and French bread. You have a meal in itself.