How is the weather where you are?

Ontario got its first major snowfall of the 2014-15 winter on Groundhog Day, the day halfway between the start of winter and the start of spring. As the hokey commercial legend goes, if the fabled groundhog (Ontario’s is named Wiarton Willie after the rural place where the mid-winter drink-up is held) sees his shadow, the rodent goes back into his hole, and we have another six weeks of winter weather. If he doesn’t see his shadow, the region ought to be for a mild late winter and/or an early spring. It’s for people who also believe in the Easter Bunny and the tooth fairy. 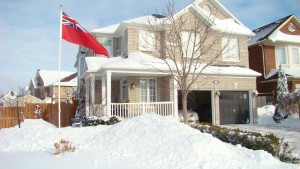 This is after we had shoveled the snow and cleared the driveway and walk after the first big snowstorm of 2015.

After a dry, but frigid January, a storm formed over Missouri, and blew into Ontario from the U.S. Midwest, starting late Sunday night. With 30 to 40 cm of snow and high winds, we awoke to drifting snow. There was no way to get out of our street, even after one had shoveled the driveway. Bob called his staff and told them not to risk the roads and to work from home. This they did with alacrity.

The cats took a look outside, and decided a nap was better than a morning promenade in the snow. Once it stopped snowing, we had our own driveway to clear. I was on the phone with some clients getting ready for my seminar this week, so Bob went out to begin the winter snow storage project. A native Montrealer, Bob knows not only how to shovel snow with the minimum effort, but where to put it so that he builds a windbreak to both protect the plants and keep blowing snow away from the walk and driveway. As well, he planned out the snowbanks so that if we get a lot more snow, we won’t exhaust the places to put it when we shovel.

Everybody cuddles their way through winter 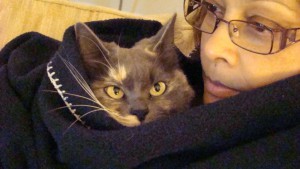 This is more like what cats like to do when the snow is falling and the wind is howling outside. Bebe comes for a cuddle with her Mummy each evening while we watch TV.

For all the family in Guyana, this all happened as the mercury plunged to -15°C (which is pretty much where it was for most of January). The wind eased off, and the sun came out as we cleared the driveway and the walk in front. The snow was light and powdery, which meant that heaving it wasn’t like throwing the heavy, wet sloppy snow we get later in February and March. We had it all done within two hours, and got our workout too.

To put the snow and the cold into a different perspective, a Canadian winter means that all the creepy, crawly and slithery creatures that make life interesting in hot and humid Guyana can never survive spring, autumn or winter in Canada. So it’s not all bad with a Canadian winter. It has a cleansing effect.