Up go the 2012 Christmas decorations! 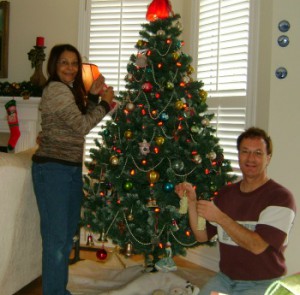 Our Christmas tree is in the living room this year, and on a grey and drizzly Saturday, the house was lit up as the tree took shape. Now the cats can snooze under it again until January.

As we begin to drag the boxes of Christmas decorations, ornaments and paraphernalia out of the basement, we remember the full-day task of getting them down way back in January. It always brings out the child in everyone to start decorating the house for Christmas time. Now that everything outside has been packed away and made ready for winter, we can turn our attention to the festive time of the year, to be with our friends and to entertain them. The Christmas tree ornaments include many that are more than a half-century old, truly antiques now even if they were not special in their day immediately post-war. Bob found a lot of them when he lived in Toronto in the mid-1970s. Others we treasure are those we have picked up in curio shops as we have travelled to various places, such as New Orleans, Philadelphia, Nashville and Louisville in recent years.

Bob has developed a very organized system, methodically labeling everything as it goes into the cardboard banker’s boxes every January so that we can get it all out in order, and find everything the next December. I have to admit that it works very well and saves a lot of time in not having to hunt for any specific thing. 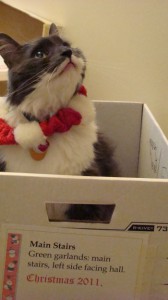 A cat in the box! All cats need is a box to play hide and seek in and a piece of string to chase to be truly happy.

There are more than two dozen boxes of Christmas and seasonal things carefully stored downstairs. It takes up two whole shelves. And of course, as soon as you have empty cardboard boxes around, you also have a curious cat anxious to explore the inside of a cardboard box. Obi-Wan wanted to watch what was going on, while Bebe decided to disappear for a while when the boxes started come up and down.

Christmas season for us always starts with the annual Streetsville Santa Claus Parade. Obi-Wan has gone with Bob seven years straight, and I rode with the two of them in the golf cart for the past two years. It is fascinating to hear all the people who have come to know Obi-Wan call out to him from the streets. “Hi Obi-Wan!” and “Merry Christmas, Obi-Wan!” are wishes we hear all along the two or so kilometres of parade route, which lasts about 90 minutes. Bob took a picture of me in the golf cart just before the start of the parade. Obi-Wan is all curled up underneath his blanket in the basket on my lap. Now that is the way to travel! 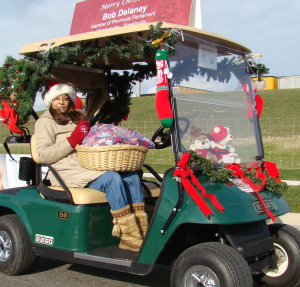 Bob took this picture of me in the Santa Claus Parade on a crisp and sunny Sunday November 25, 2012. Obi-Wan is cuddled up in the basket on my lap, kept nice and warm by his pillows and his warm blanket.

The summer paintings and watercolours have come down to be replaced with the Christmas seasonal artwork all through the main level. The empty Christmas boxes are filled with the rest-of-the-year things that decorate our home. We give those things six weeks off for Christmas while the festive things come out of storage. Our trusty old Christmas tree is making its 14th appearance, and still looks like new. Decorated, with some pine scent nearby, one has all the ambience of an actual tree. The difference is that there are 14 trees still growing because we haven’t had to have one cut down. It was a two-day job this year, with a few little odds and ends left after. It is well worth it. The house looks very festive.