Skip to content
Home Our Home Our bird family

In the spring of 2015, a couple of red-breasted robins decided to build their nest in our crabapple tree along the side. Then along came some eggs, and we had a family move in. That year of 2015, there was songbird music as never before, and Mr. and Mrs. Robin were attentive parents. We saw two little baby birds poke their heads up over the edge of the nest.

Our family of red-breasted robins who have set up house in our crabapple tree by the side. You can see Mom on the top, and the two little ones peeking out just below her.

Our principal worry was a wicked weekend of wild weather near the end of June, with driving rain and very high winds, blasting the full fury of the storm directly at the tree the birds had moved into. Once the storm abated, we were worried that the eggs or babies (we were not sure which at that point) may not have survived a whole weekend of bad weather. However, there were two downy heads poking over the edge of the nest looking at the brand new world.

Father robin forages for food, and sits off at a distance, squawking at anyone who ventures near the nest, and following up with fly-by runs to request some privacy in a bird-like way. Both parents spend their days looking for food to bring home. As neither of our cats have front claws, and Obi-Wan’s days as the resident hunter (mostly mice) are largely behind him, the birds are free from climbing predators. The nocturnal skunks don’t climb, and we have never seen baby bird on the menu for any raccoons, who have not showed up this summer in any event. We revised this post through the summer as our robin family developed. Click one of the pictures below for a gallery.

Bob and I both saw the third baby robin today. No doubt about it. Mom and Dad robin are keeping busy on food runs with three mouths to feed. They had a perfect day today: warm and calm, with plenty of food to find.

Today, I went outside to check on the plants – and on our bird family – and the babies were leaving the nest! I kept the cats in as the little ones were finding their footing on the lawn, and stretching the new wings. Mom and Dad are watching as the little ones learn how to find something to eat, and flutter along in their first flights. We had some mid-day rain, and Mom and one of the babies returned to the nest to ride out the rain.

On Wednesday morning, the cats darted out for a stroll. We were not sure if the birds were still around after the nestlings began to spread their wings. There was, however, one little nestling still getting flight lessons in the back yard from Mom and Dad. We got his picture as he sat patiently on the stone wall by the walk, which you can see in the gallery on this posting. Mom and Dad wanted no distractions from the cats while they taught baby bird the facts of life (learn to fly, and stay away from cats), and literally chased Bebe back in the house. She came running through the cat port with a squawking bird on her tail. Obi-Wan watched this spectacle, decided that discretion was the better choice, and ambled in on his own a few moments later. 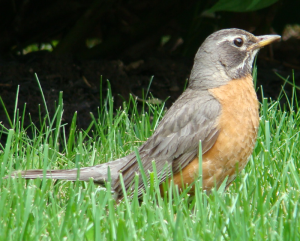 Mother bird and one baby bird are still in the back yard. The cats haven’t been prowling the perimeter while the baby bird has been taking flying lessons. So far, he does not flutter for more than a few seconds at a time. Father robin and most of the nestlings seem to have gone their way in the world. Mother is still trying to coax this last baby into sustainable flight. He’s been using the shrubs for rest and safety, and Mom has been bringing him some food as she tries to coax him to follow her into flight. As Bob was watching the two this morning, a little baby skunk made a very rare appearance in the back yard on the patio. He saw Bob standing well away from him, and turned and slowly ambled out of the yard, sneaking under the gate. He was just a little guy, and did not get startled or feel threatened.

Friday July 10: Baby is still around 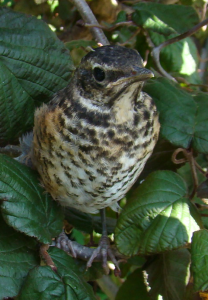 Baby bird is still a tree-dweller, with Mom hovering nearby. We are careful not to touch or startle him, though he does let us close enough to take these remarkable photographs. This photo was taken the morning of July 10, 2015.

Baby bird and Mother bird continue to live in the back yard, with baby bird being a fairly trusting bird in letting people get reasonably close to him. Mother bird hovers nearby, and brings food, though baby doesn’t seem to want to spread his wings and fly. The baby gives no appearance of there being anything the matter with him, but hugs a tree branch without flying. We have seen him flutter from ground to branch and from branch to ground, but not fly any extended time or distance. Mom has not given up on him, and continues to bring food, and chirp to have him follow her. Each morning, we look for Mom, who is still using the safety of the back yard to try and coax baby into flight. There is abundant food around, and neither bird has been in any danger from the cats or from any other animal. Mother bird has started to use the bird bath we rigged out of an unused ceramic plant saucer. We will try and get a video of that process. Obi-Wan is not really interested in the birds, and a curious Bebe has been chased back into the house by a squawking parent robin a few times. She seems to have given up going out on her own. Bebe ventures out when one of the two of us are present. We keep an eye on the situation so that neither cat disturbs the birds.

Bob: I went into the back yard to finish reading a book in the quiet of the gazebo this afternoon. I checked on baby bird’s last location, and baby had gone. As I was reading, Mother bird flew down onto the grass with food in her beak, calling for baby, who responded from the corkscrew hazel tree near the gazebo. Mom fluttered into the tree and fed the baby, then hopped down onto the ground. To my pleasant surprise, the baby bird followed her, and the two poked around the edge between the grass and the bushes, with Mom seeming to teach the baby how to find food. Then baby fluttered to the top of the shed, and flew to the window ledge, where Mom brought more food. Baby bird was looking through our side window, and flapped its little wings, lifting itself up and down, to see if it could fly inside the house. No such luck, and it flew into the Japanese maple by the shed, where Mom visited twice more. In between these visits, I walked quietly up to the Japanese maple with the camera, and shot a video of the little guy perched in the tree. Then, after Mom’s second trip, both birds took flight and left the yard for a while. Both flew back after a short time. Baby bird now appears to have the strength and confidence to put some wind beneath his wings.

Wednesday July 22: The family is off on its own

It has been about two weeks since our last sighting of any of the robin family. During the hot weather while Mother Bird was feeding the last baby, we laid out a shallow ceramic plant saucer on the stone wall, and a few times, Mother Bird came to splash around, cool off and have a bird bath while she was doing her food-gathering rounds. We didn’t manage to grab the camera in time to get a picture or a movie on the few times we watched her enjoy her bath. Bob had one of the last sightings of baby bird. He was doing some yard work, and baby bird was perched on top of the fence. He let Bob get up nice and close for several minutes. We heard the mother and one or two of the babies in our bushes, where they camped out for a few days. We had become able to pick their songs out. Now they have been gone for about a week and a half, and we wish them well, hoping that either the babies will return to nest, or Mom and Dad will come back to re-use the tree or the nest again next year.