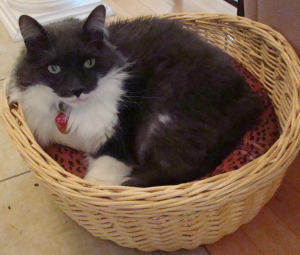 Obi-Wan’s favourite place to take a nap was in his basket at home in the hallway near the kitchen. He liked to be close enough to hear conversations among his people and our guests when they came to our home.

It is with deep sadness and sorrow that Bob and I convey to friends and family the passing of our eldest cat, Obi-Wan. Obi-Wan died at 6:34 p.m. on the afternoon of Monday July 27, 2015, secure with Bob and I, in his basket and with love, compassion and mercy at his vet’s. My children, Zachary and Nicklaus, came to the vet’s office to bid goodbye to Obi-Wan. It was they who picked him out of a litter born in Wasaga Beach, Ontario in September of 1999. Obi-Wan lived with us for a bit more than three years before Bob and I became a couple.

Obi-Wan lived for 15 years and almost 11 months. Obi-Wan was diagnosed with chronic and incurable kidney failure in April, 2015. Much to the pleasant surprise of his vet, he responded to drug therapy, and for nearly four months, remained in good health. Obi-Wan did much better than anyone expected, and even went off his pain killers for more than a month in June and July.

In July’s fading days, Obi-Wan began to have trouble keeping food down, and became visibly uncomfortable. During the weekend of July 24 to 26, he began to have trouble eating. By Sunday of that weekend, he had stopped eating. He showed the remainder of the end-of-life kidney failure symptoms he had not exhibited before. We were not going to let Obi-Wan linger or suffer through a predictable decline. Through the weekend, his condition worsened. His vet confirmed that his poor little kidneys had shrunk to less than half their normal size. His organs could no longer rid his body of its poisons, which built up within Obi-Wan. His heart, however, was as big and strong as ever. Of course, we knew that part, though the vet confirmed it in her final examination of him. 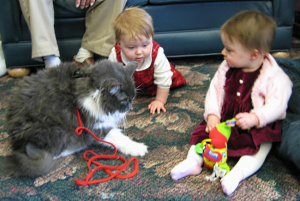 Here at a 2007 Christmas party at Erin Meadows seniors’ residence in Mississauga, Obi-Wan let two little babies play with him.

Obi-Wan has been on our Christmas card every year since 2004. Local Mississauga residents have seen Obi-Wan at the Streetsville Santa Claus Parade every year for the past nine years. Obi-Wan attended the Streetsville Bread and Honey Festival, was a frequent visitor to seniors’ homes, and went with Bob to many of his community events as an Ontario Member of Provincial Parliament. Obi-Wan was picked up, handled and patted by hundreds of kids, been photographed countless times. He came with us as we inspected our present home while it was being built in 2005.

Every animal that sheds its instinctive reserve and embraces a human being, loving and being loved, is a special animal. One like Obi-Wan, who worked at being a good communicator, who would shake hands, sit on command, sit up for treats (especially his favourite, cooked ham), who loved learning things, and who loved being with people transcends the special to the unique. It is no exaggeration to call Obi-Wan our city’s best-known cat. Watching Obi-Wan shake hands with visitors, our guests would normally exclaim, “I have never in my life seen a cat do that.” That was Obi-Wan. He sat in the living room to take in the discussion, seldom further away than his basket so that he could hear what was being said. 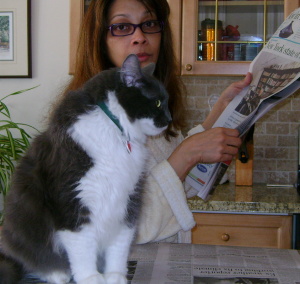 Obi-Wan in his prime in 2009: hopping up on the counter to share a Sunday morning with Mummy, reading the newspaper together. He would focus so intently on the newspaper that one would wonder if he really could understand what was inside the pages.

Even as Obi-Wan was part of our public face, he brought Bob and I so much joy and companionship at home. Obi-Wan was there whenever one of us fell ill, or went through challenging times. Obi-Wan has had his own health issues through his life as well. He survived a bad reaction to vaccines years ago. He was diagnosed with diabetes in 2007; and made the journey of being a managed diabetic with us. He knew how to tell us when his blood sugar was high or low. Obi-Wan was never a problem when measuring his blood glucose or administering insulin. He has survived pancreas and liver infections. In recent years, his eyes began to form cataracts, and he struggled with osteo-arthritis in the past two years. He was in some pain, and having trouble getting around. Obi-Wan spent two days in April with his vet trying to flush out his kidneys after his chronic kidney failure diagnosis. His vet saw him again in June, and was amazed at how he had managed. His kidneys, however, were not getting better. He was then stable at stage three of four stages. Obi-Wan had good months in May and June, and up until mid-July. Though his taste in cat food changed, he kept a strong appetite. It was only in mid-July that Obi-Wan clearly dropped into stage four of terminal kidney failure, with vomiting and diarrhea problems beginning in recent days. There was no doubt that for Obi-Wan, life had become a struggle for existence.

By the winter of 2015, Obi-Wan could no longer hop up onto our bed to sleep at night, needing a lift up and preferably down when he did come. In the past few months, he has stayed downstairs at night, though he would, until his very last few days, climb the stairs in the morning to wake everybody up. Obi-Wan didn’t complain when we offered him a ride back down the stairs in the morning. Ever independent, he squirmed as soon as he was on the main floor, letting us know he was quite capable of walking from there, thank you very much. He gratefully accepted a footstool to help him get up on his favourite living room chair, owing to the pain in his joints. Right to the end, he used the cat port in the screen door to go for a stroll in the back yard, taking a nap in the gazebo on his second-last day, and sniffing the outdoor air to check up on who was around his yard. He walked around to have a last look at his house before we left for the vet. He was a loyal, loving, big boy cat with a sense of humour to bring a smile or a laugh to his people when they needed it most. 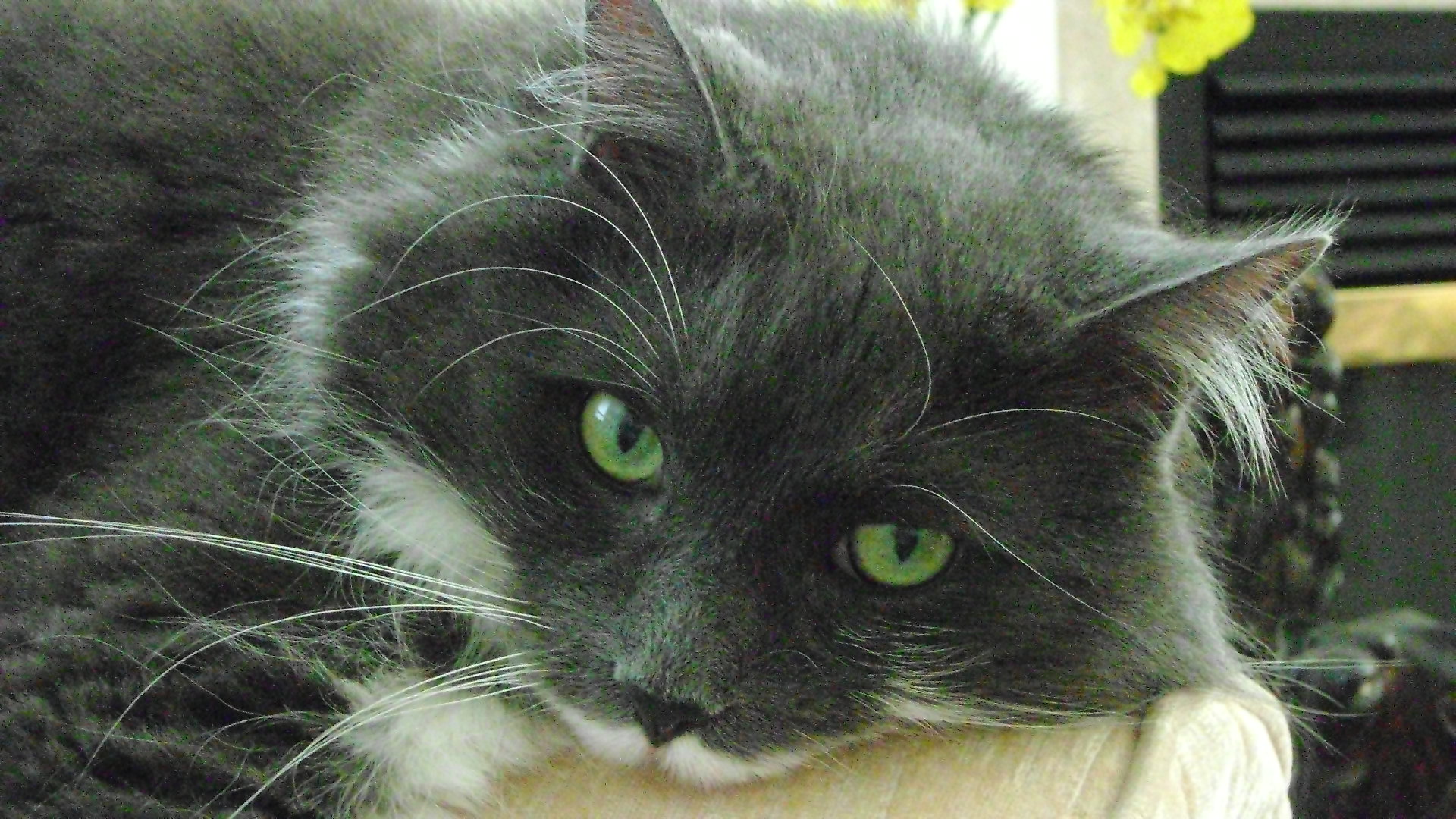 Here was our big boy as we knew him best. His eyes and heart were full of love every day of his life. We will never be able to forget Obi-Wan. His life has enriched our own and so many others. Thank you, Obi-Wan. Click the picture for a larger size.

We will have a much more extensive photo gallery of Obi-Wan on the web site soon. Obi-Wan’s friends, and those who admire him, can visit his Facebook Page to share their thoughts.

A Texas classmate friend of mine from the 1960s, Lomas Sharma, has named a new male foal, born August 2015 after Obi-Wan.

A Prayer for Obi-Wan

Heavenly Father, Creator of all things, thank You for having entrusted us with such a loyal friend as Obi-Wan. Thank You for letting this handsome animal teach us unselfish love. Thank You for the memories we will recall to brighten our days for the rest of our lives. Finally, in gratitude, we return the spirit of our cherished companion, Obi-Wan, to You, until we meet again in glory. Amen.