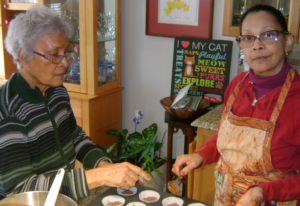 Today, we are making some chocolate cupcakes for our family Easter 2018 weekend. 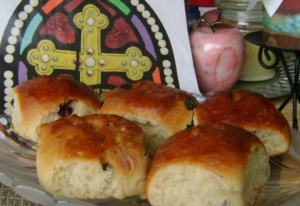 Our 2018 Easter weekend is the last island of quiet before we get cranked up for the 2018 Ontario election. It is going to be a hectic few months until the late spring election date. Mom came over to spend the weekend with us at the house.

We made hot cross buns, a traditional English favourite, from basic ingredients, and they turned out great. Our Good Friday dinner on one of the final remaining fast days of the Christian calendar was a simple, but nourishing clam chowder.

Our winter started out cold and snowy, and seems to have ended more in a whimper than with a Canadian March’s frequent bang. It’s common to get about a sixth of the winter snow in March, with winter often going out by dumping a severe blizzard on us. Indeed, that happened to much of the U.S. eastern seaboard, and the Atlantic provinces, but it missed southern Ontario. Our March was cold and dry, but otherwise uneventful.

Just as Mom was returning from Guyana, I was on my way there. In fact, Bob drove us to the airport; we hauled our stuff into the terminal; found Mom returning from Guyana; and we checked in then literally boarded the very same Caribbean Airlines flight for the trip out, connecting via Port of Spain in Trinidad. Bob took Mom home.

We were in Guyana from Sunday to Friday, and did four intensive days of client interviews at the Grand Coastal Hotel in Georgetown for my immigration consulting business. Our appointment schedule was completely full, in fact, oversubscribed. Those few people who chose not to show up for their appointments with us were immediately replaced by prospective clients on our ‘standby’ list. We met some very nice, extremely capable people in 2018. I have lots of work to do to look after them now.

We are hoping to visit other places in the Caribbean in the near future. There is certainly no end of interest.

Merlin turned 15 years old at the end of January. Bebe was 13 years old on Easter Sunday. Zach celebrated his 40th birthday in January, and Nick was 39 in October. Bob and I will answer if asked, but won’t start the discussion. Everybody is in good health. Merlin recovered nicely from his aural hematoma in his left ear. This meant his ear swelled up with a big bubble of blood that the vet had to drain. He had about 15 stitches to have removed a few at a time, and wore a plastic cone for a few weeks.

Zachary had an article published in Reef Hobbyist Magazine, (Q4 – 2017 issue) featuring some of his excellent underwater photography. You can read it on-line.

Bob was on the ice as a goaltender quite regularly during the winter, and had some good games, considering that most of the people with whom he plays are now about half his age. One day, he held the other team off the scoresheet for the first 40 minutes of the game, finally allowing just two goals in a nice win for his side. I’ve learned that laundry cycles in hockey households are governed by the time of the weekly game. After he comes back from the game, we need to do a load of white stuff, and a load of towels. That keeps our household’s goalie going to games to get into equipment that is always warm, clean and dry.