A farewell to summer

While Bob followed the Toronto Blue Jays journey into the baseball post-season, and I tried to learn the cricket-like game, autumn was also a time to bid farewell to the things we treasure most about our home: our divine garden and the ability to have our ‘outdoor rooms’ during the good weather.

We enjoyed a sumptuous Thanksgiving feast this October. Thanksgiving weekend was a balmy throwback to summer, with daytime highs in the mid-20s. Bob wanted scalloped potatoes to go with the turkey dinner, and set out to make it with me. We were both surprised at how relatively simple it was to do, and how good it tasted. We used my toaster oven to bake it, and of course, eliminated much of the salt for our customary low-sodium dish, substituting instead fresh herbs and spices picked that day from the garden to bring out the taste of the potatoes.

That Thanksgiving weekend, we put out four bulging yard waste bags. Bob cut the grass, and I disassembled many of the crumbling annual flower arrangements, and took down the tomato plants that gave us such a bumper crop of delicious tomatoes to enjoy all summer long. I have made pesto for our winter cooking, and our friends have received some big and tasty tomatoes in recent weeks. On an unusually cool post-Thanksgiving weekend, much of the balance of autumn take-down happened, with the lawn ornaments being wrapped and boxed, and the patio furniture stored. Bob also wrapped our downspouts with bird wire to keep the neighbourhood raccoons from moving into our attic. We have already found out how destructive they are.

It has been a summer of having mechanical things fall apart, the latest of which was the lawn mower, for the second time this year. Earlier in the summer, the power switch on the handle failed, and halfway through the last grass-cutting, while I was away taking a test for my immigration consultant certification, the motor failed on Bob. Luckily, our neighbour behind us was right there, and Bob finished the job with our neighbour’s mower. We have the reconditioned lawn mower back, and Black and Decker threw in a few extra fix-ups because it was the second time the mower was in the shop. It reminds me of the story of the farmer who boasted of his generations-old belt. It had had several new straps, and half as many new buckles, but every generation swore it was the same old belt.

Bebe is on our Christmas card 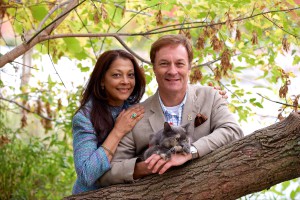 From among our annual Christmas Card photo shoot for 2015, this shot is taken by the banks of the Credit River late on a cool mid-October afternoon.

We recently took our annual Christmas card picture. It is our first without Obi-Wan. It is hard not to think of him as we remember him following us around the yard while we did the annual autumn take-down tasks. Bébé was very good in her first Christmas photo as the ‘top cat.’ We took it at Streetsville Memorial Park on a cool, dry mid-October late afternoon. The sun peeked through the cloud cover just long enough to let us get the last golden rays of a fading Ontario afternoon.

This summer, I set out to do the on-line certification program to become certified as an immigration consultant in Canada. Much of it is complementary to what I learned as the Executive Director of Inter-Cultural Neighbourhood Social Services. However, there is a lot of new information that I never knew in about 15 years of being in the settlement services business. Taking the English-language proficiency test, however, is mandatory. There is both a spoken and a written component. It happened in two parts over the Saturday of our Canadian Thanksgiving weekend in October. Bob was teasing me about whether I was able to prove I could speak English. Indeed, according to the metrics measured in the various tests, I can speak English. Everybody has to do it to become certified.

I hope everyone has had a pleasant autumn thus far. Look out for our 2015 Christmas card in the coming weeks.