Bob’s Christmas message from us all

Merry Christmas to all our friends, neighbours and family, and a Happy New Year! 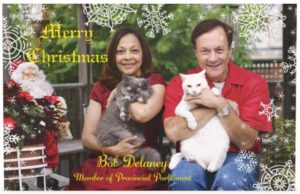 Our Christmas card photo was taken in October in our gazebo in the back yard. The photo was just in time. The next day, bad weather closed in on Mississauga for about a week.

Canada’s 150th anniversary celebrations all through 2017 were lots of fun. Our yard had its best year ever. With my new immigration consulting firm, Upper Canada Immigration, I made my first overseas business trip, to a familiar destination: Guyana. It worked out well. With some targeted pre-trip marketing, and follow-up afterward, I am still reaping the benefits of that trip.

Bob was the more frequent traveler in 2017. He was on the road regularly for the Ontario Ministry of Energy, and as Ontario’s member of the Energy Subcommittee of the Council of State Governments, made three trips to the USA this year. In Iowa in the summer, Bob contributed to two comprehensive state-provincial policy resolutions: one in support of the North American Free Trade Agreement (NAFTA) and one in support of open trade in energy. He was in Manhattan and in Nevada in December to continue that work among the provinces and states as Ontario’s delegate. 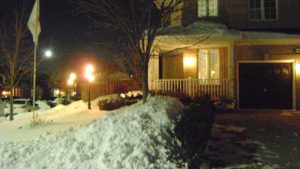 Lit up by a silvery half-moon, and the street lights, our Mississauga home was truly snowed in for two days until the region’s snow removal service caught up with us.

Folks in Guyana have no frame of reference for what a serious snowstorm means in Canada. It’s more than buying a coat and gloves! Bob will tell about growing up in Quebec, saying that for a while in the 1960 and early 1970s, the snow descended almost annually around Christmas. That’s not the case here in southern Ontario, where we are at the same latitude as northern California.

Nonetheless, our 2017 Christmas Eve dawned cold and dry, with weather warnings of what was to come. By late afternoon, it was like flipping on the snow switch, and down it came. From bare grass, our driveway snowbanks grew to chest-high as we shoveled the driveway four times in three days. By Christmas Day, there was no point in trying to visit us, as nothing short of a four-wheel-drive SUV with winter tires could make its way onto the street, let alone navigate snow that left cars just spinning their tires, and going nowhere.

A white Christmas may evoke idyllic Bing Crosby-type images, but the practical side is that you’re literally snowed into your house. Anticipating that, we had all the Christmas shopping done, but you still have deal with the snow, which means clearing the walk and driveway. Of course, just after clearing the Christmas Day snow, the plow passed late in the evening, which meant going out on Boxing Day to remove the hard-packed snow the plow leaves across one’s driveway after it has cleared the street. We were running out of places to put the snow as we shoveled it. Bob hauled a lot of it across the street, and raised the height of the snowbanks along the median between the road and the sidewalk. Then, of course, it got cold, down to -19°C at night.

The cats, of course, miss going outside. The snow on the patio was more than knee-deep, far deeper than either cat is high. Bob tries to keep a ‘cat run’ clear to let the cats get some fresh air outside. After clearing up the packed snow the plow left, he went outside to clear a cat path for Merlin and Bebe to go for their back yard stroll.

Our cat, Merlin was the toast of Mississauga with his many public appearances throughout the year. See his Canada Day public appearances on Merlin’s Facebook Page. He and Bob walked in the Mississauga Santa Claus Parade in December. Merlin was invited by name to appear both at Mississauga Celebration Square, and at Toronto City Hall. Our warmest wishes! Merlin loves his walks in the park, and enjoys the attention he always gets being among a crowd of people.

Our little Bébé cat is more of a stay-at-home girl. Before we adopted Merlin, she stepped into the very public role of the late Obi-Wan during the autumn of 2015, and performed well. But Bébé was clearly a reluctant performer, as her picture on our Christmas card shows.