The Larisa Grove back yard in full bloom

It was a very hectic spring at our home. On May 1, the Ontario government tabled its 2014-15 Budget, and on May 2, one of the opposition parties said they would not support it. The Opposition Party, the Conservatives, didn’t support any government bill, so that meant that a vote on the Budget would result in the fall of the government. This was not unexpected. On Friday May 2nd, the Premier called an election for June 12th, and we were off and running!

I managed the phone room for Bob, who did in five to seven days what took that many weeks to do at the last election in 2011: getting the campaign office; installing the wiring; getting the phones hooked up; bringing in the photocopier and the computers and making everything work; getting nominated; organizing the managers and the campaign team. And all that is before we took our message to the streets.

Bob ran against the same six-time loser of a candidate that he has run against twice before — and now three times. Bob is three of her six election losses! 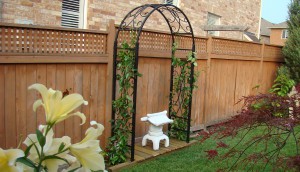 Our new, custom-built garden arbour. The metal frame was assembled from a kit from the nursery, and Bob built the base from spare wood we had on hand in the shed.

It was pretty obvious from the very outset that the government had wind in its sails. The opposition, in an absolutely inexplicable mind-cramp of a decision, announced that if elected, they would fire 100,000 people in the public sector. To start with the entire Ontario Public Service is only about 64,000 people, which meant they proposed cutting off funding to police; schools; hospitals; mental health; cities and the like. That went over like the proverbial lead balloon.

To those of us working the phones, we knew instantly that Bob was going to win in our riding. He cleaned up in the various debates, and the month-long campaign went very smoothly. In retrospect, it now seems so quick. In the end, the Liberals were re-elected with a slim majority, and Bob won one of the largest victories in Ontario. We polled more votes than ever before; earned our highest-ever share of the popular vote, and thrashed our opponents by our largest-ever margin of victory. 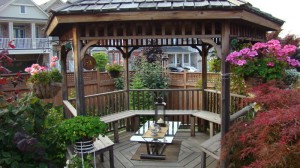 The last time visitors to this web site saw our gazebo, it was covered in winter ice. This is the gazebo as it is meant to be, where our friends come to chat and enjoy summer evenings in Mississauga.

I returned to my EduNational business in mid-June, and Bob hit the road to do his normal June round of graduations; picnics; barbecues; annual meetings; more graduations and other pre-summer events. Then it was Canada Day (July 1st), when elected members go like the clergy does at Christmas. The day after, it was off to the Legislature to elect the Speaker. The day after that was the government’s Speech from the Throne. The following week was debate on the Speech from the Throne. Then the Ontario Budget that set up the election was re-introduced, and Bob, as Chief Government Whip (as of March of this year) had to coordinate the government’s response. Two weeks, the government’s majority passed the Budget and just like that, summer started for Bob. He basically slept for the better part of two days.

Visit us, and enjoy the back yard ambience 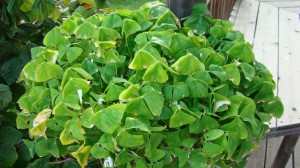 Our summer garden gives rise to wonderful indoor plants when fall and winter come. In particular, these authentic Irish shamrocks thrive outdoors from late may to mid-September, and make great take-home items for your living room when the cold weather returns.

Even though we normally start our summer in early July, August is nice here too. The weather actually wasn’t all that cooperative in July, but the forecast for August is great. Posted here are some photos of our back yard oasis and garden in full bloom. It really does look terrific this year with all the rain we have had.

I had wanted an arbour to allow my kiwi plants to climb and bear fruit. While Bob was at Queen’s Park working on the Budget, I asked a guy to come in and quote me a price. He wanted $3,000 to build an arbour. Neither of us felt the project was worth that amount of money. We went to the nursery, where I had seen some nice arbours in kits, and we bought one for about $300. Bob used up some spare wood we had in the shed, and built exactly the kind of base we needed to plant the kiwis at each side of the arbour. Today, after building it all by hand, and staining it against the elements, we did some digging in the garden and installed it. We re-used every bit of dirt we dug up. Even the nails in the arbour base were all recycled. And it looks just like what I had wanted, giving us a place for the pagoda that also serves to anchor the whole thing against the wind when it blows. 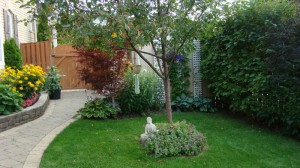 With the July wet weather, the garden and the yard are home to thriving plants, and very happy cats. Our hedge, planted several years ago, now gives us a great deal of privacy and seclusion.

We have a great kitchen garden every year. We can harvest garlic; chives; dill; thyme; basil; oregano; rosemary; green onions; cucumbers; tomatoes; beans and hopefully some eggplant. We also have a nasturtium plant. You would recognize its leaves and flowers (all edible) on ritzy salads in high-end, avante-garde restaurants. Visitors for dinner are certain to have some ingredients picked moments before use. The hedge now gives us a great deal of privacy, and the trees are adding to the feeling of living in our private oasis. This year, we were joined by a family of squatters: raccoons who were looking for a home, and decided to rip out on of our roof vents and move in. It took a visit from the pest control outfit to remove them (safely and alive), and to repair the roof to keep them from destroying any more vents. The cats would watch for them through the screen door at night. Bebe would start to hiss when she saw them. We would turn on the patio light, and there would be mom and three or four of her young. They were not at all shy around humans, which is the main reason our cats are ushered inside at dusk. Obi-Wan has already had two skunk encounters. 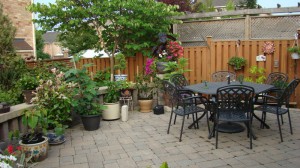 Our outdoor dining room at Larisa Grove is intended to have a tropical look, with its potted plants and summer time setting. Dressed up for dinner, and candlelit at dusk, it is a great place to enjoy a summer evening with us.

One of the more idyllic settings for dinner in Mississauga (if we do say so ourselves) is on our back patio, especially when it is set up for an evening soiree with candles, and we do the full treatment for dinner. Bob has almost finished the weather vane, which will be installed this month. Aside from seating six, we sometimes bring out the kitchen table, and can serve 14 to 16 comfortably out on the patio. On occasion, when it’s looked like rain, we use Bob’s canopy, and have a candle-lit dinner in the rain under its roof. The cats keep any wandering field mice honest. This year, some of our guests who enjoy their own culinary adventures, may head home with some of our designer garlic. We have three varieties harvested this year: music; Mennonite; and Red Russian.

The cats, whom everyone always asks about, are both fine. Bebe turned nine in April, and Obi-Wan will be 15 in September. Obi-Wan enjoys his naps much more as he ages, but he is a healthy cat whose diabetes remains under control. Bebe has become a very affectionate grown-up girl cat who loves cuddling, and often sleeps on our bed all night. We hope everyone has a pleasant summer. Remember, if you enjoyed this post, you can write a comment below. We wish more of our friends would do just that. Click Reply, and add a thought or two.