We were all looking forward to a relaxing Christmas this year. Bob had a very long autumn sitting at Queen’s Park, with more than the usual amount of travel and committee work. My EduNational business picked up smartly toward the end of the year, and it finished on a high note.

Bob’s big personal thrill of the year came when he was not only the starting goaltender in a hockey game against the Toronto Maple Leaf Old-Timers, but also delivered the Province’s greetings at the same time. 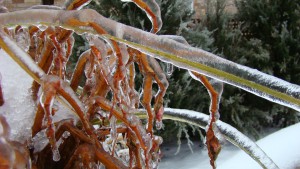 Freezing rain coated tree branches with a layer of heavy ice. We did not lose any trees on our lot, but countless millions of Ontario trees were not as fortunate.

And then came the big ice storm of December 2013. A major weather system carried a huge mass of wet air up from the Gulf of Mexico through the heart of North America before colliding with a mass of cold air coming down from the arctic, and Toronto was frozen solid. Quite literally. Power lines accumulated ice and the weight snapped many of them. More often, tree limbs were coated with ice, and snapped off with the weight, bringing down power lines as the limbs or trees fell. The devastation of southern Ontario’s tree canopy will take a decade to repair.

Here in Mississauga, we did not lose our electricity at home, though some 50,000 homes were without power for periods of between a few hours and upwards of a day. Fortunately, it was not too cold at the time. As this is written, the ice storm was followed by a few days of relatively mild winter weather, which managed to let the ice melt and fall off many of the trees. But in early January, Ontario went into its first prolonged deep freeze, with temperatures of -25 degrees Celsius and a fierce wind that made it seem like -40 degrees. 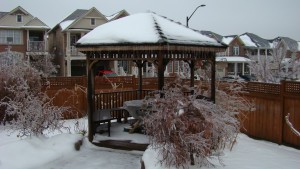 Our gazebo normally shines in summer sunlight, and here it is in bleak and grey December, coated with ice from the great ice storm of December 2013. Does not look like an inviting place to enjoy a cup of tea in the evening, as it was just three months ago, and will be again in April.

Toronto was not as lucky. Hundreds of thousands of residents went days without power. People went into city-operated ‘warming centres’ to stay comfortable. Toronto’s power was restored before the deep freeze hit, fortunately. The Ontario government put together a program to help compensate low-income people who may have lost food due to spoilage, with grocery chains scouring the country for gift cards, whose cost was shared among the various private sector sponsors and the government. As Bob says about some aspects of politics, it may not have been pretty, but it did work.

Then it snowed, and we shoveled and shoveled. Now the snow banks mean you really have to heave that snow to clear the driveway. Winter has come charging in like a hungry lion this year. One only hopes it will ease off, and we can have an early spring in time for what is expected to be an April or May election in Ontario for Bob, who will be seeking his 4th term in the Ontario Legislature. 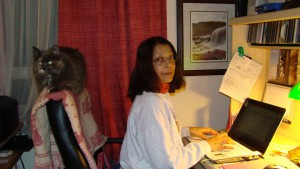 Sometimes Bebe comes to keep me company while I am working at the computer in the study. I wonder if she is reading over my shoulder.

But Christmas did come, and with it a few hectic days of cooking to have the family all over to the house on Christmas Eve and Christmas Day. Mom was staying with us through the holidays, an it was nice to have her around. After Christmas Day, we generally tuned out the world, and enjoyed a few days of sleeping in, reading books, watching TV, puttering around the house and going to bed early. It was lovely.

We did a nice Christmas turkey with all the traditional trimmings for Christmas Day. Zach brought over his girl friend Jenny. One of Bob’s fellow MPPs, Dipika Damerla, joined us with her daughter for Christmas dinner as well.

And we did some bread-baking, revisiting two of our very favourite bread recipes: buttermilk white, and corn bread. There is nothing quite like coming in on a cold day to a house aromatic with the scent of fresh baking bread.

Zach brought over my birthday cake. There are still not so many candles that we need a fire permit to light them. I managed to blow them all out with a single breath.

On New Year’s Eve, everyone once again gathered to celebrate my birthday. It turned out to be a pleasant end to a year full of challenges, and a year that saw everyone here progress a bit. Both cats remain healthy. Obi-Wan turned 14 in September, and Bebe will be 9 years old in April. Obi-Wan’s diabetes was well under control in 2013. Bob and I remain healthy as well. For that, we have a lot to be thankful.

In 2014, we look forward to progress on EduNational for me, and a successful re-election of Bob, and of the government should an election be called. Happy New Year to all our friends and family, and we wish everyone a healthy and fulfilling year from our Churchill Meadows home in Mississauga. May we have the pleasure of entertaining more of our friends at home, especially once the weather turned warm again, and the garden flowers once more.