Summer’s blanket of heat and humidity has descended on our yard. This year of 2012, our garden looks better than it ever has. The garden is a long and complex springtime project. This year, my Mother took a real interest in the garden, and the extra days she spent with us helping me get everything planted were glorious.

The many indoor tropical plants in the house go outside around the Victoria Day holiday weekend. Now the patio looks like one of those tropical spa getaways you see in the upscale design magazines. Bragging? You bet. Outside looks good, and we are proud of it.

The cats have their urban jungle territory back. Bebe keeps her eyes open for what we think is a skunk that periodically wanders into and out of the back yard. When she sees it through the back door window after dark, she screams at it, and it runs away. The stalking Bebe and Obi-Wan even surprised a squirrel in the gazebo in July. Below you’ll see Obi-Wan eyeing the squirrel. A pussycat without front claws, clearly can’t climb the gazebo and do much more than watch, but that was just fine for Obi-Wan.

Along with watching fish in an aquarium and birds at the feeder, a real, live squirrel is live theatre for cats. Mr. “Chatter” Squirrel scrambled up the gazebo, and squawked at the cats until they got tired of waiting, then they both left to take a nap. Chatter squirrel ended his visit by munching away on the bird seeds tossed out by the hungry feathered friends. 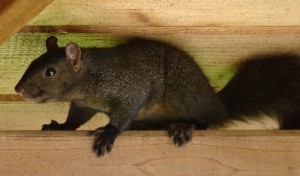 The Larisa Grove neighbourhood black squirrel (“Chatter”) who cleans up the bird seed dropped from the feeder. In July, he wasn’t paying attention, and our two curious cats came up to say hello. Chatter Squirrel climbed up to the top of the gazebo and squawked for help. Bob took his picture.

After he had stuffed his squirrel tummy on the bird seeds dropped from our feeder, Chatter squirrel hopped up on the fencetop sidewalk that is the neighbourhood highway to the local wildlife. 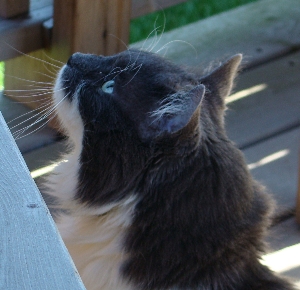 Don’t let his usual calm countenance deceive you. Obi-Wan, even as he closes in on age 13, is one masterful hunter. Any late mice who didn’t pay attention when he was in the yard can attest to his infinite patience on the hunt, and also to his very deceptive speed. And as a 17-pound cat, he is one strong predator.

You may also notice the summer headers on each page. The page header images were all taken in the back yard, and are close-ups of the flowers that adorn our outdoor room from May through September. Bob and I photographed the flowers through the late spring and early summer with these page banners specifically in mind. This my web site’s summer time theme.

Bob has finally finished the long Legislative sitting that began right after Family Day in February, and ran through the Ontario Budget hearings and clause-by-clause, which he chaired on the Standing Committee on Finance and Economic Affairs. He was very surprised at how many people had been following the Ontario 2012-13 Budget as it progressed through his committee. I was one of those people who watched from time to time while I worked from home. Even when we go out, people talk about it. As he says, “All that was at stake in those proceedings was the fate of the 40th Parliament; a $150 million election; and a $125 billion budget. Other than that, there was no pressure.”