When the tropics come to Ontario

The summer of 2012 has just been too hot and exhausting to be an outside cat. A tuckered-out Bebe takes her afternoon nap inside on the back of Obi-Wan’s chair.

Of all the things I miss least about the land of my birth, the extended, humidity-laden, blast-furnace Guyana summer heat ranks pretty high on that list. Yet that is what the Mississauga summer has been from the outset. Day after rainless day of high humidity and relentless sun. It’s hard to stay outside during our all-too-short Mississauga Ontario summer with the heat and humidity sapping your energy all too quickly. It has, as of this date, literally not rained in our neighbourhood all summer long to date. 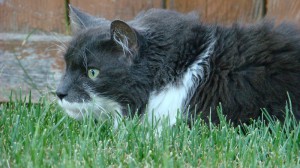 The picture says it all. With his friend the grey squirrel (“Digger”) in the back yard, Obi-Wan showed how he is hard-wired to be a hunter when he went into his crouch: eyes locked on the squirrel like a laser, shoulders up, ready to sprint or pounce. Digger squirrel kept just close enough to the fence to be able to scramble to safety at any moment, and Obi-Wan watched very, very closely.

Our pussycats long for their yard all through the dark and cold autumn, winter and early spring, and now have to come inside to take their afternoon nap. They can go out for a while as the sun heads for the western horizon. Bebe’s waterfall Japanese maple tree near the gazebo has become her outdoor haven, providing her a cool place to recline and watch the birds who come to eat the seeds from our bird feeder. As noted in an earlier posting, we have a grey squirrel (“Digger”) and a black squirrel (“Chatter”) who let the cats watch them as they clean up the seeds the birds toss to the ground . 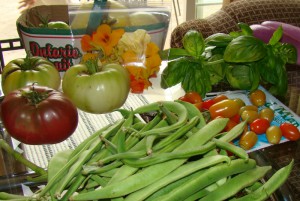 Each year, we dine on fresh veggies and herbs, and share them with our friends. Here’s a small sample of what we harvested last fall.

Our tomato plants are the healthiest and best they have ever been. We are in for a bumper tomato crop in the Churchill Meadows agricultural co-op. We have heirloom tomatoes; lemon boy tomatoes; solar-power tomatoes and cherry tomatoes. I also planted Swiss chard, which is kind of like spinach. Anybody who is looking for tomatoes, zucchini, cucumbers, tomatillo (for salsas), eggplants, chili peppers, tabasco peppers and wiri-wiri peppers, this is the time to let me know. The chili peppers are 14 inches long. We’ve planted sweet beans and bora beans in the garden. In fresh herbs, we have chives, mint, French tarragon, both English and Caribbean thyme, basil and perpetual pesto basil, oregano, lemon balm and lots of catnip. Over and above amusing the cats, fresh catnip leaves boiled make for splendid tea.

The garden is the front of the house has been re-made now that the Japanese maple has really taken off. After trimming the branches close to the ground, we’ve planted five different kinds of clematis, including the highly-prized Star of India clematis.

This is the second year I have planted dhalias. They were magnificent last year. This year, I divided up some of the hostas, and I am enjoying seeing our hostas proliferate on our neighbours’ lawns. I have three hydrangeas growing: one behind the gazebo; one near the patio; and one beneath the flagpole in front. That last one needs an extra drink of water each day, as it spends little time in the shade.

Last year, I purchased two hot-papaya echinacea plants. This year, they have doubled in volume, and are covered in blooms. Last year, I bought a baby-tut papyrus plant. I had it in a pot last year. It was very thirsty. I brought it indoors last winter to winterize. This year, I put it into the ground near the gazebo, where it is absolutely enjoying the outdoors.

I kept all my Kimberley ferns from last year, and I’d strongly recommend people do that, as it turned out to be well worth it. Moving them outside allowed them to thrive once again. They look terrific. This year, I planted Swedish ivy in my urns, and they are stunning. The yard is quite the experience of being far away in a tropical garden, yet close enough to go to the fridge and get something wet and cold.

We have cuttings from spider plants to give away, as well as begonias. In the steady heat, it has meant a lot of watering to keep things growing and looking great, but it is worth it.